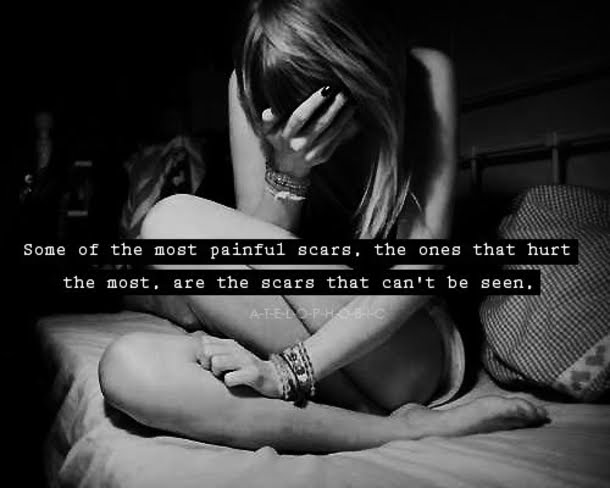 A few years ago I wrote an entry about forgetting. Forgetting that not everyone knows about me. This last year has brought a LOT of new people in to my life. I have moved to a new job, a new home, and have started a new lifestyle that has opened my life to lots of new people. And I still forget that these people have no idea. They have no idea that at 3 years old I walked in on my father masterbating and instead of covering and hiding he decided it was time I learned what sex was. From that moment on my life was never the same. I spent 10+ years being sexually assaulted any time I was home alone with my father. As I grew older and questioned what was happening he used it to threaten me… that if I told anyone I would be the reason our family was split up. Then, as time continues and I realized what was happening was not ok, the abuse became more verbal and physical. Hitting, pushing, throwing things and swearing in my face. Calling me fat and lazy and worthless. Telling me that no one would ever love me. If he wasn’t belittling and abusing me he was telling me that what happened was my fault, for being irresistible and for coming to him that day. When it was time for me to get married, I needed closure. So I told my mom about what happened. And when nothing changed, when she stayed with him, I told the police. See, I had proof. Something most children aren’t “lucky” enough to have. He was stupid enough to take pictures and videos. And these are the things I asked for before I got married to give me closure to that chapter in my life. Of course I wanted to have them because I knew it might come down to turning them in. Which is exactly what I did. But when he was faced with the prospect of going to prison to pay for his crimes, he decided he would rather not. So Christmas Day 2007, after fighting with my mom at a bar, he returned to the bar with guns from home and shot blindly into the side of the building. He then drove 2 hours up to his girlfriends house where swat caught up to him and he ate the end of his Magnum. At the bar my mom and their friend were found hit on the floor. A couple more centimeters and the friend would have taken a round to the heart. My mom was shot across her body ending in her low back. Hours of surgery and a month or so in the ICU and she is thankfully with me today. But the trauma never ends. Not when it has been such a lifetime full. So I do everything I can to try to improve my life. I have a job I love, a husband who loves and uplifts me, kids that adore me. I work out to try to release some of my anxiety and tension. But it never ends. And this year has been such a stressful, awful year that I’m just hoping to see the end of it. Because I have so many people that support me, despite having no idea the life I’ve lived so far.